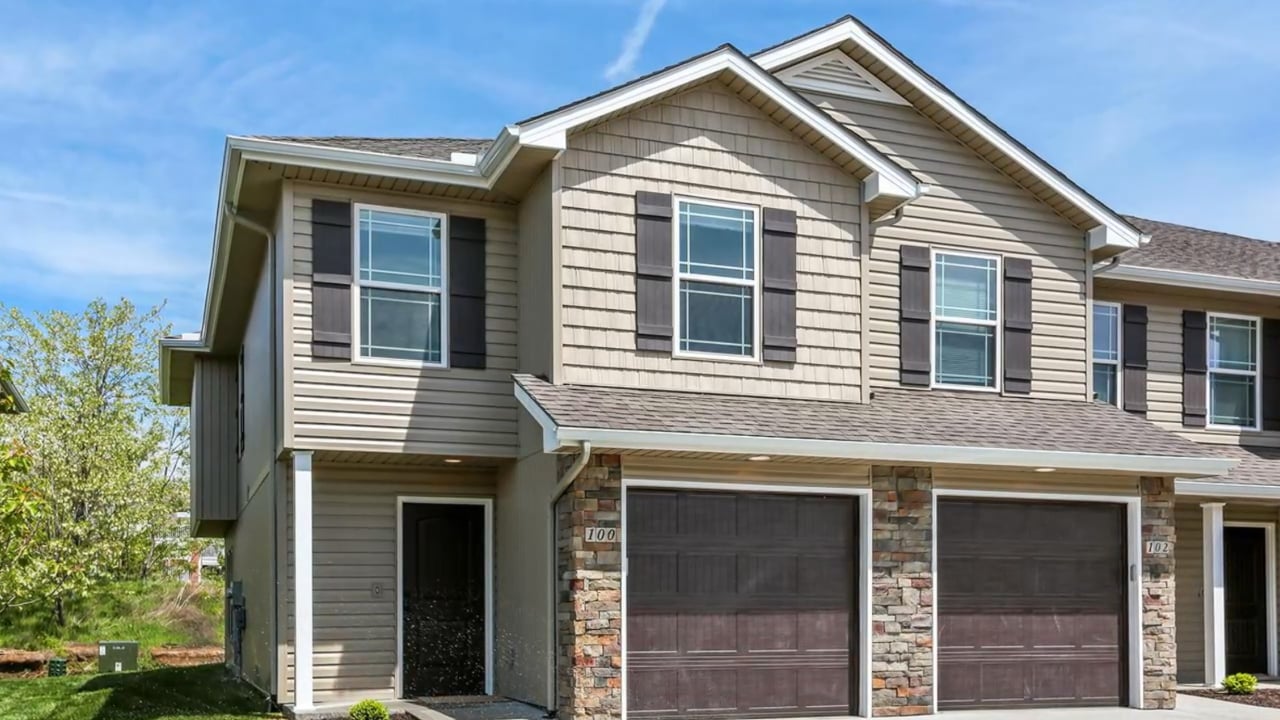 Our units feature granite countertops throughout, stainless steel appliances, a fireplace, a full-size high-efficiency washer/dryer in each unit, as well as a one-car attached garage. Units are available in 2, 3 & 4 bedroom configurations and boast large living spaces from 1400 to 1800 square feet, most with fully finished walkout basements. The community is also located within the excellent North Kansas City School District and Staley High School.

We are a new townhome community, built in 2017.  Located in Kansas City, Missouri, we are conveniently nestled in the Northland at 152 Highway and North Oak Trafficway allowing easy highway access for downtown commuting, nearby shopping, entertainment, restaurants, and the airport.

Serrano Luxury Townhomes are located within the North Kansas City school district. The NKC Schools currently have an Annual Performance Report (APR) of 97.9%. They have earned both state and national accreditation and are recognized throughout Missouri as a leader in academic innovation. This includes Staley High School which is in the 93.2 percentile in the state and has a student-teacher ratio of 17.7 to 1.

OUR GOAL IS TO MAKE YOUR RENTAL HOME SEARCH EASY AND COMFORTABLE!

MGC Leasing & Property Management, LLC manages rental properties throughout the Kansas City area. We encourage you to browse our website to view all we have to offer.

Easily and quickly apply online for your property of interest. Click "view all of our available rentals" to be securely connected to our available listings page to view our rental homes, rental guidelines, and applications.

Although Kansas City has been considered a hidden gem in the Midwest, 2015 drew in 24 million visitors. CNN Money ranked KC as number 2 in their “Top Ten Best Cities for Jobs” article. Not only is it an incredible place in regards to the job market, but in Kansas City, there is always something to do. Whether you spend your day going to a Royals game (2015 World Series Champs!), or maybe you’d rather head to a Chief’s game at Arrowhead, the neighboring stadium, which broke the world record for loudest stadium in the NFL. Or perhaps you’d rather visit one of the museums, or maybe attend the ballet or the symphony at the new Kauffman Center for the Performing Arts. You could even walk around the Country Club Plaza and see some of the over 200 fountains that have put KC as number 2 in the running for a city with the most fountains, falling short of Rome. Or you could visit one of Kansas City’s famous BBQ joints. There truly is something for everyone here in Kansas City.

Kansas City is a city that continues to grow, yet still encompasses a homey feel. With major companies, such as Ford Motor Company, Hallmark Cards, Sprint, DST Systems, AT&T, Cerner, and many more companies, Kansas City houses an incredible job market. One of the leading fields for job openings is medicine, with the growing demand from large organizations like St. Luke’s-Shawnee Mission Health Systems, Health Midwest, KU Medical Center, Children’s Mercy Hospital, Truman Medical Center, and so many more. Despite all of the job growth, Kansas City is ranked in the top 5 U.S. cities with the least traffic.

U.S. News ranked Kansas City in the top 20 of the best affordable places to live in the United States. Missouri has housing costs that are generally 25% lower than the rest of the country. Neighboring Missouri is Kansas, which while still considered a very affordable state has slightly higher rent than Missouri by about $1000. Kansas City is ranked number 3 for best ‘starter cities’ in the United States by CNBC. As Kansas City continues to grow and develop it has also increased its rank as one of the best-performing large cities, reflecting the value that Kansas City holds in so many aspects.

Coined as Walt Disney’s childhood home and where he started in the animation business, Kansas City has TONS of history and hidden treasures. From Glace Artisan Ice Cream, which was named one of the best ice cream spots in the U.S., to be the first city to introduce Happy Meals, there’s always something you can learn and discover while living here.

At Serrano Townhomes we know your pets are important members of your family and want to provide a wonderful space for you and your furry friend to call home.


Pets not only enrich our lives but they are known to have positive effects on our physical and mental well-being. They can lower stress and provide a more active social life. With all these benefits, we understand why you would want to share your home with a lovable companion.

Pets are permitted in most units. Breed restrictions apply